After the events that took place on 9/11 in 2001, morale was down but the message was-"Go out and have a good time, travel and show the terrorists that they haven't won!". When It all went down I was asleep and hung-over from the night before. I remember being awoken by a "Breaking News" alert on my television which had been on all night. I had been living with my parents at the time, so as I stumbled out of my quarters and into the living room, there was my mom, dad  and sister all huddled around the T.V. set with tears in their eyes. We have family there, so naturally phone calls were made to make sure everyone was all right. It was all pretty nuts to say the least. To this day who knows what really happened that morning. I will say that as a result , peoples lives, day to day routines and mental states were forever changed .Some more than others, but changed, nonetheless. Things would sort of return to normal soon after, particularly In the world of sports, namely MLB. It was September ,which meant "Pennant Race" to those of us familiar with the sport. The perennial play-off bound Yankees were in the midst of another championship caliber season and all sorts of patriotism had people coming out In  droves to witness post 9/11 history and I wanted to be a part of it. Major League as well as N.Y. baseball would resume and tickets were selling like hot cakes. Now I'm not sure what a hot cake actually tastes like but I'm assuming they were pretty damn good because they sold fast. My sister knows how much sports mean to me and knew that I would jump at the chance to attend a baseball game In N.Y. , especially after what had taken place, and bought my ticket! I was heavy into drinking then and some time away from my stomping grounds would do me some good, my sister knew that better than anybody.She has always been there for me, In fact they all have (I have 3), and I don't know what I'd do without them. So,not only did we score some pretty good seats, the Yanks were playing the Orioles and this would be  Cal Ripken's last time in Yankee stadium! The memory of the game Is still fresh in my brain. The roaring crowd, Cal Ripken's farewell trot around Yankee stadium and the guy trying to sell me a Derek Jeter portrait after the game. Most of all, though, I can remember the cab ride to the game and the ominous feeling It gave the group we were with, my sister and I. There wasn't any talk about baseball or who we thought was going to win the game or how crowded the streets were. Just an awkward silence as we all looked out of the cabs backseat windows with the same thing on all of our minds. We all knew what we were thinking, but instead of talking about it, kept it to ourselves. In the end the whole experience proved to be rather therapeutic and I'd like to think that traveling to N.Y. so soon after the 9/11 events to enjoy a game of baseball ,played a small part in the rebuilding efforts, not only structurally/monetarily  but morally. 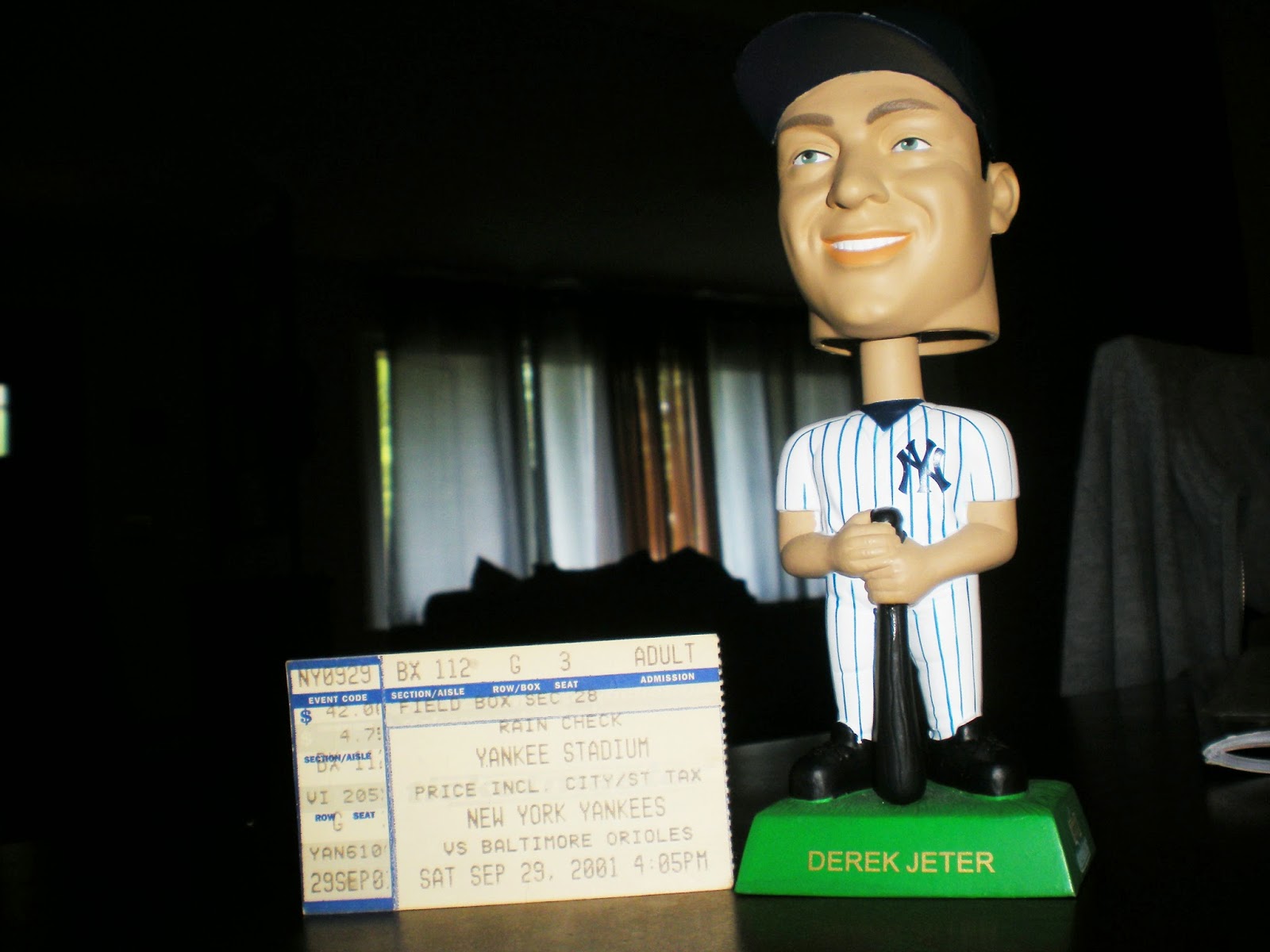