Lately I've been In a bit of a baseball card funk ,spending more time photographing baseball cards with my phone and posting on Instagram.Instagram allows me to post card pics quicker and doesn't require a lot of writing,which at times can be a bit of a chore.There really Isn't anything about baseball cards,modern baseball cards that is,that has me running to the card aisles.I think packs are overpriced,especially those that yield a bunch of commons which I have absolutely no more room for.I kind of dig the new Topps Bunt physical cards and just might pick up a couple packs of those.Other than that ,not much else out there for me to get excited about.
My only saving grace would be a card sop opening up nearby so that I could snag up a few singles here and there,but that's not happening anytime soon.Hobby shops have gone the way of the dinosaur.
I have,however,been searching ebay for graded rookie cards of guys who used to be studs but because of the whole steroid thing,have become very affordable.I thought about doing this after unearthing my graded Manny Ramirez from a box the other day.I thought,what the hell,for the price of one graded Mike Trout I could build an  army of graded rookie cards  of suspected and admitted steroid studs that include guys like Juan Gonzalez,Albert Belle,Kevin Maas,etc! They'd have to be 9 or better and preferably PSA.So that's what I'll be focusing on ,that and the usual Mets singles. 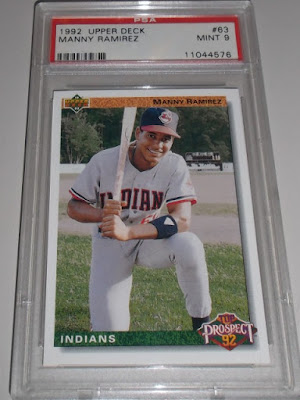 Oh,and I've got a couple packages to pass on,hopefully by this weekend.One's going out to Matt of Bob Walk The Plank who I can't thank enough for stopping by and commenting on a regular basis ,even If It's just to hear me lament and complain.Also ,my good buddy Mark Kaz recently sent me some cardboard goodness,bolstering my Markakis and Canseco stash,so one of these will be headed his way.And last but not least,I've had a stack of Cubbies put aside for  Dimebox Nick for the longest,hopefully I can get  all three of these out by the weekend or early next week. 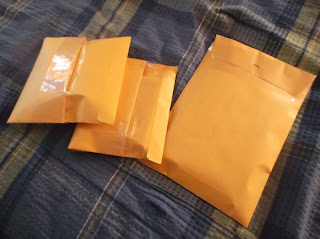